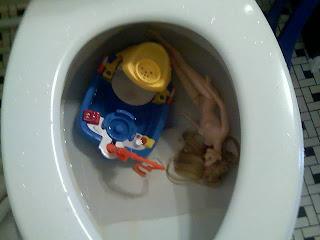 The nude body of our beloved friend Barbie was recovered today, along with a small fishing boat, after an apparent drowning. Barbie’s connection to the capsized boat was unclear. Foul play was suspected. A suspect was quickly apprehended and questioned regarding both incidents. 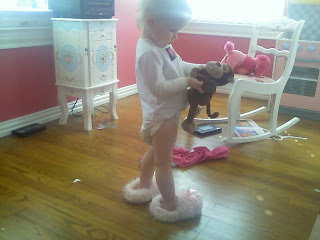 The suspect only had these few words to say about the matter: “No no, *Baby A*, that not nice.” Then later, “Barbie bath. *Baby A* mess.”

The alleged perpertrator appeared to have ditched her soaked pants in an effort to conceal the evidence. She is wanted for a string of terroristic acts, including Vandalism of Sister’s Bedroom and Theft of Sister’s Fuzzy Slippers.