Today was the Toddler Fair at Kids Kaleidoscope, where they set up a ‘country fair’ sort of situation with fun little stations where you can catch (rubber) ducks, toss (plastic) vegetables into bushel baskets, and oh, so many more creative and clever games that toddlers find entertaining, since they are too little to go on the Pumpkin Patch field trip with the big kids.

The kids were supposed to dress like Farmers. Since Baby A’s wardrobe consists of smocked bishops, smocked backwraps, and smocked pants sets (do you see a pattern here?), I was a little baffled about what she should wear.

And THEN I remembered these overalls. My mother, the packrat, saved these overalls from the mid-1970s. Among every other stitch of EVERYTHING my sisters and I ever wore, or touched, or breathed upon. I was wearing these overalls when I caught my first fish: 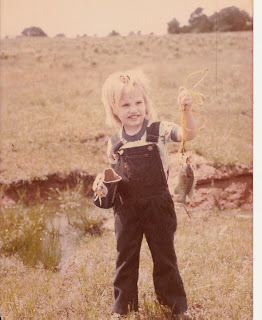 Toddler fair pictures will come later, but for now, I just want to share these vintage-1970’s Levi Strauss overalls. And the kid is pretty cute too. 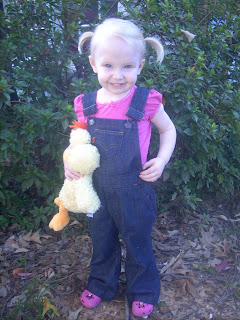