This room has changed drastically since we bought the house! It was added on in the 1960s by the previous owner, and she had her collection of wicker in this room. It was like The Museum of All Things Wicker…..every single thing, even the birdcage and lamps, were wicker! And the astroturf carpet was a nice touch. Really, though it wasn’t my style, I could see the potential. The ceiling was covered in antique tin ceiling tiles, and the huge floor-to-ceiling windows were from an old church that was being torn down. At nearly 600 square feet, this room was a huge job, so we saved it for last! 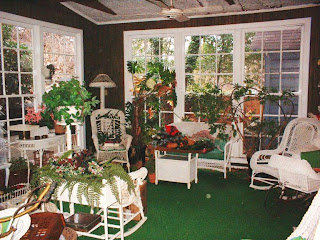 (On a side note….do you see the blue structure outside the window? I had forgotten about that ’til I saw this picture, but there used to be a closet out there, that the owners had built right out the other back door, sort of giving the appearance of an outhouse stuck to the back of the house. We tore that down a long time ago). 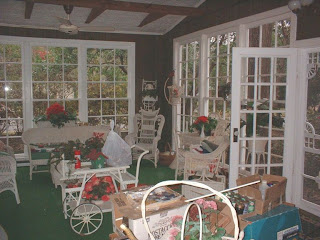 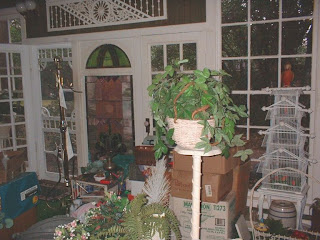 This room was almost completely destroyed by termites and water damage. A tree had fallen across the roof of this room before we bought the house, and sat there for quite some time before anyone did anything about it (since the house was just sitting here vacant for 5 years). Water poured in, the roof was bowed downward, and when we tore the ceiling tiles down carpenter ants came pouring out by the jillions. It was DISGUSTING. Oh ~ and the smell!! I can’t really describe to you the stench of rot and rats. Do you see the brown streaks in this picture? That was the termite poop. 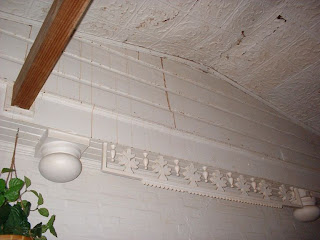 This stained glass window and the little gothic arch window above it (not shown in these pictures) were from that old church. We had to remove them to put in more support for the ceiling, a huge beam above, then vertical supports had to go in this wall to hold up that beam. That little arch window now has a new home hanging above my bed. 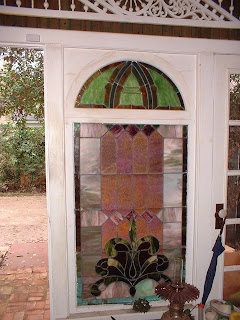 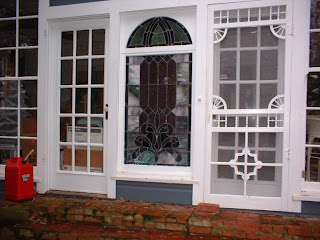 This is the nasty, back-breaking tearing-out process (yes, I did my share, in case you’re wondering….I was the girl who carried the garbage to the dumpster as the guys tore it all out). We tried to salvage the old ceiling tiles, but they were so disintegrated from all the water damage that most of them came raining down from the ceiling in rusted chunks as we tried to pry them loose. Carpenter ants rained down as well, and we’d have to stop the tearing out periodically to attack them with bug spray. 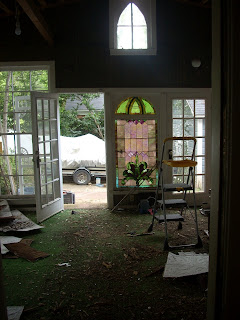 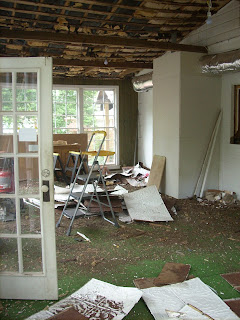 This is our friend David, who did most of the work in this room BY HIMSELF! He’s quite a miracle-worker. AND a saint. He never complained, not one time, about having to tackle this disgusting job! We got bids from several people, or TRIED to get bids, and nobody else wanted to do it. 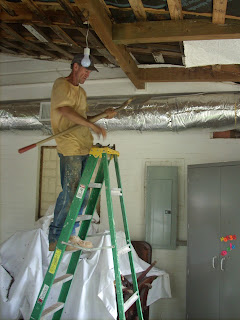 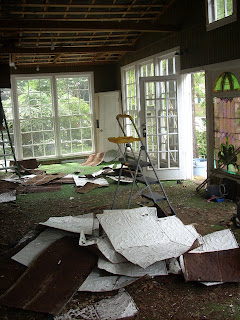 The rebuilding process…..all new sheetrock, wiring, insulation, paint, molding, floor joists and subfloor, and fixtures…..we had to remove three of the old windows because they were rotten, so we put french doors in their place. Three closets were added, one of them a huge walk-in closet lined with floor to ceiling shelves for the TOYS. The other two are for extra clothes, since this 80 year old house didn’t really have an abundance of closet space. 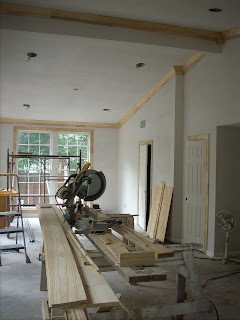 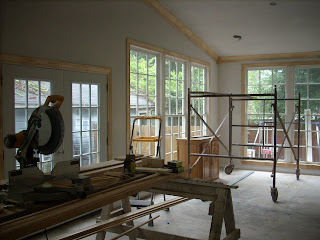 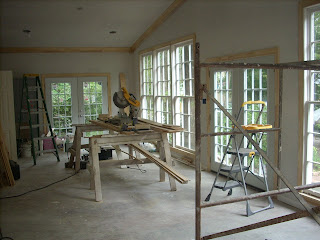 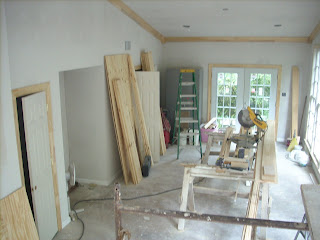 And now, for the finished product. 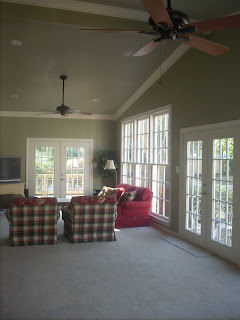 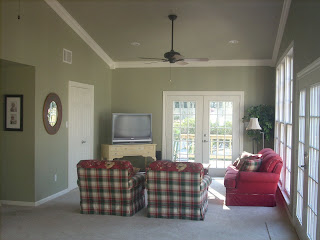 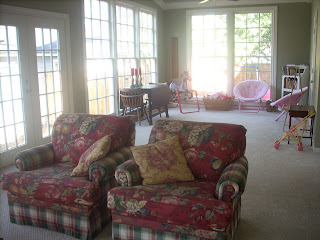 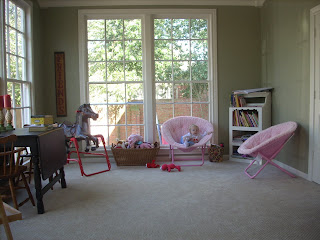 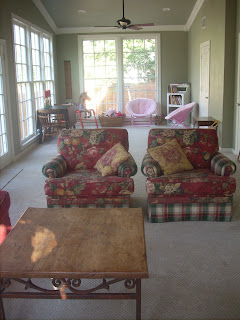 We have a ‘kid’ side, and a ‘grown-up’ side. KB is quick to let me know when I have crossed over the line into their half of the room. And/or when the grown-up side is messier than the kid side. Which of course NEVER happens…… 😉