Well, I tried to think up a cute title for this post to sum up all the festivities we’ve celebrated the last week and a half, and that was as creative as my brain would get this morning. I need coffee, I tell ya. My brain does not function un-assisted. I ‘quit’ all caffeine yesterday. Officially. We’ll see how far I get with that.

This year was Annie’s first Thanksgiving Feast at KK, and don’t tell her big sister…but this one was my favorite. 🙂

Here she is waving to her fans in the crowd… 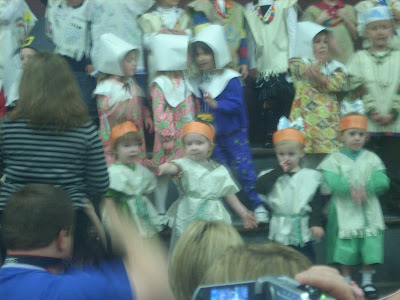 They sang a couple of songs… 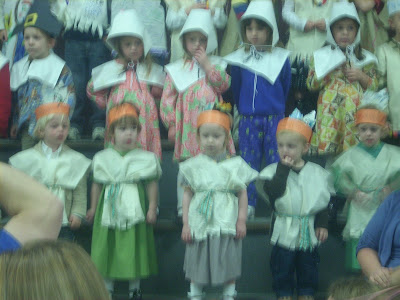 Then the little ones sat down while the “big kids,” aka four-year-olds, sang their more challenging songs. 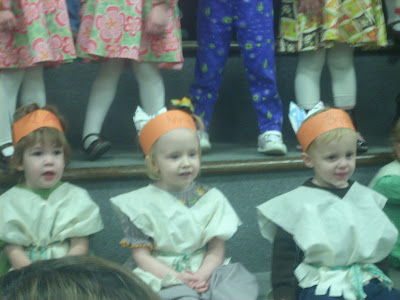 Let me just apologize again for my camera. The truth is….I dropped my little point-and-shoot Nikon Coolpix camera on the Big Dam Bridge this summer, and it has had encephalitis ever since. And we all know how people and cameras with encephalitis ain’t quite right. So if someone would be so kind as to let Santa know that I really need a Nikon D90 SLR Digital Camera for Christmas, I’d be so grateful. I have been good this year, after all. Thank you.

So after the singing, then began the feasting. And thus struck blow number one to my diet.

~~~~~
A little background on our family Thanksgiving Tradition. My dad’s side of the family has had a family reunion on Thanksgiving Day since the 1930’s that began with my great-grandmother and her children (aka my grandmother and her brothers and sisters). Through the years the family grew to include their spouses and children, and their children’s children (aka us) and now, our children. I don’t go every year; I probably average once every three years since we try to alternate spending holidays with BF’s family or mine.

The reunion has alternated between Nacogdoches, Houston, Arkansas, and Burleson each year. Until this year, that is, when I decided to step up to the plate and volunteer my house for the reunion! It was SO much fun having so many family members here and catching up with everyone. Everyone brought a dish or three, and thus struck blow number two to my diet.

I made a chocolate cake and chex party mix. With the help of this little kitchen fairy. 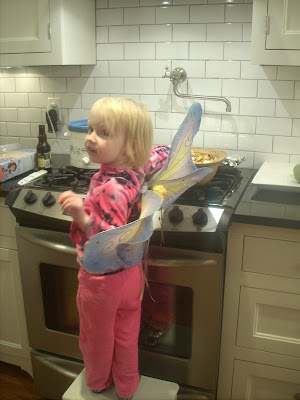 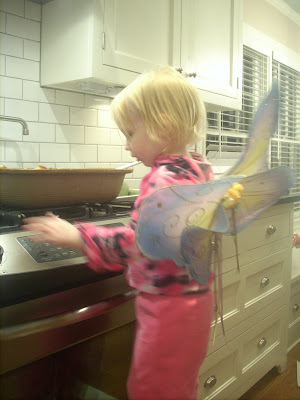 I really regret that the only picture I got was of my 92-year-old grandmother playing my piano. 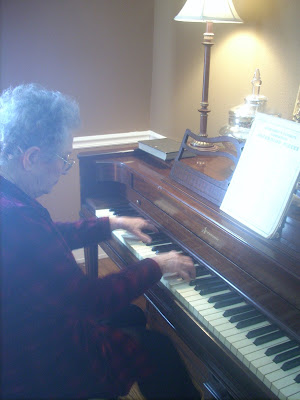 But, I’m happy to have this picture…even if its a sorry picture taken with my junky little Coolpix camera! NO-BODY plays the piano like my grandmother. She’s pretty famous for her piano-playing…or should be, actually. And taught me how to play when I was little. She entertained us all, playing hymn after hymn beautifully, in her silent-movie-piano-playing style, from memory.

~~~~~
So the day after Thanksgiving, we finally got around to decorating the Turkey cupcakes I planned to do earlier in the week before I got busy cleaning batter out of my under-counter lights.

To start with, I made one cupcake as an example. Here he is: 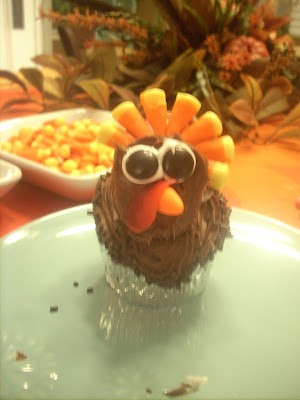 How cute is he?? Naw, I didn’t think this up…in case you’re wondering. 🙂 I bought a cupcake cookbook from the KK book fair this week, and he was in there. I knew that book would be a hit at our house, because in the words of my friend, “Cupcakes make everything better.” Right, Callie? 🙂

The cupcake crew ready for their Food Network debut: 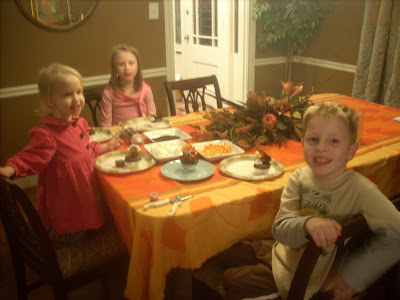 We had great fun gluing various body parts onto the turkey with icing, in between devouring the whole candy corn, marshmallow, sprinkles, and m&m buffet. The kids definitely got all sugared up, that’s for sure. But it was VACATION and anything goes on vacation.

Joshua, the engineer, carefully, thoughtfully, and precisely assembled his turkey. 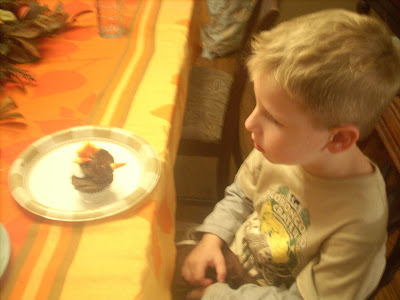 He turned out picture-perfect. 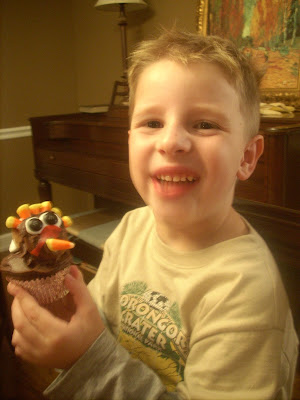 Kate was irritated because her head kept sliding off of her body. 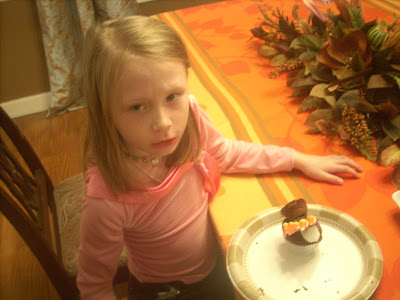 She’s not really the easy-going type. But the turkey turned out fine in spite of his weak neck (and nobody really eats a turkey neck anyway…). 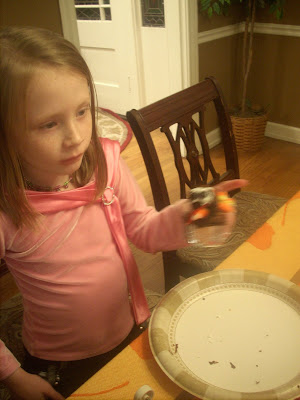 And Annie haphazardly stuck turkey pieces together, to assemble this masterpiece: 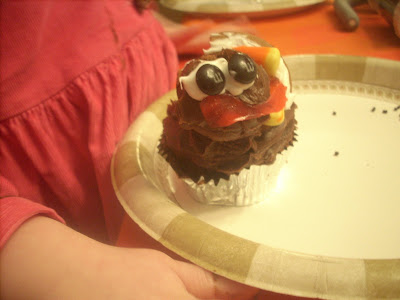 But the important thing was NOT how the cupcakes looked, but how chocolatey everybody’s face could get: 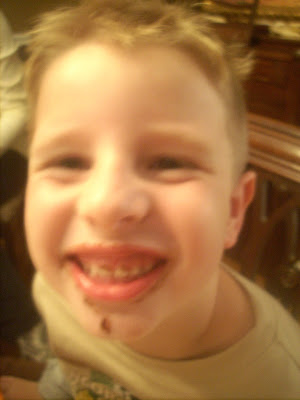 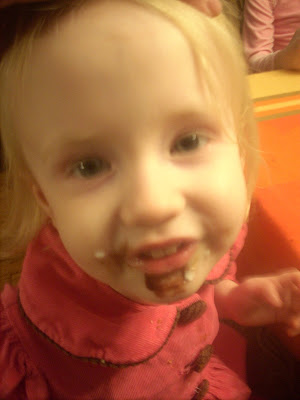 I’d say the cupcakes were a success, judging by the turkey carcasses left behind. 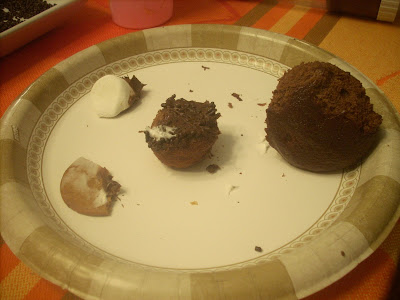 And with that, the death blow was struck to my diet. But its ok: boot camp started back up yesterday. So now the un-doing of all those 172,000 calories begins. 🙁