This is a picture of our house from sometime in the 60s or 70s. Definitely after 1966, when the previous owners bought the house, because you can see the kitchen in the left of this picture, which was added on by them. 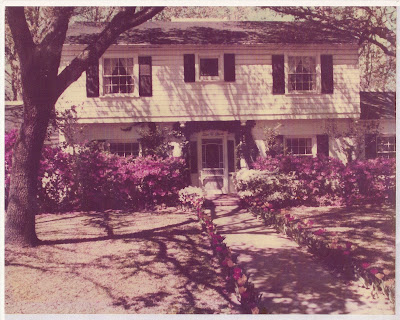 Back then, it was white with black shutters.

A couple of years ago, I was out in my yard, and an older gentleman was driving by and stopped to introduce himself. He had lived in this house as a child, he said. His parents had added on the office (the room on the right in this picture) in 1944 or 1945. His childhood room is now KB’s room. I wish I had written down his name, because I forgot. I’m sure my friend A.T. knows, though, because she knows the name and address of everyone who has ever lived in Tyler City Limits, and could probably tell me his license plate numbers as well. Anyway, HIS parents (whatever his name was) had painted the house white.

Then the Phillips family owned the house. Judge Phillips. Anybody remember him? (I don’t. But all the old-timers around here call this ‘Judge Phillips’ house).

And then, the Gallops bought it in 1966. And added on a kitchen, and painted it blue, and it was blue for years and years, until Yours Truly decided that the Williamsburg Blue *DEFINITELY* had to go. But it will always be the Big Blue House to me….. and to the neighbors who sometimes let it slip that they think I should have left it blue. I do love that unsolicited advice. 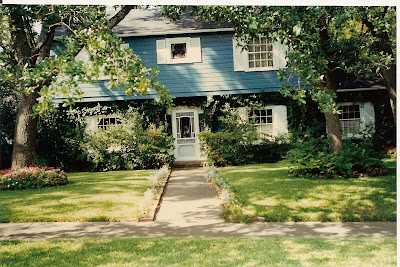 The date on the back of these pictures is 1991. I remember the house looking like this, blue with white shutters, and seeing Mary Dell Gallop working in the yard ALWAYS. (Because we lived two blocks down the street for seven years). She had BEAUTIFUL flower beds, and would probably roll over in her grave if she saw what I had let the flowerbeds become. 🙁 Sorry, Mary Dell….yard work isn’t my gift or calling. I wish it was.

If you look closely, you can see someone to the right of the front door (your left). I think that’s Mary Dell. Click on the picture to make it bigger so you can see Mary Dell for yourself.

And sometimes, when there’s a full moon out on a quiet night, you can look in that exact spot and she’s still there.

Just kidding. But it did give you chills, didn’t it? 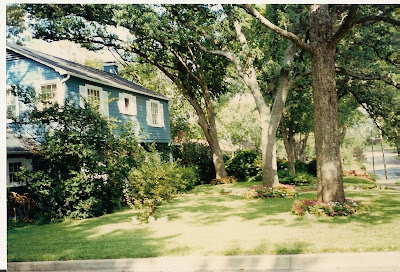 Of course the yard didn’t look anything like this when we bought the house. Mary Dell had passed away years before, and the house sat here empty and the yard had been left to its own devices. The flowers died, and the weeds took over. Weeds higher than my head.

So while I don’t quite have Mary Dell’s flowerbeds….at least they do look better than I found them. That’s worth something, right?

And here it is in 2005, when we bought it. Chipped, peeling paint, overgrown weeds, and definitely no tulips lining the sidewalk. 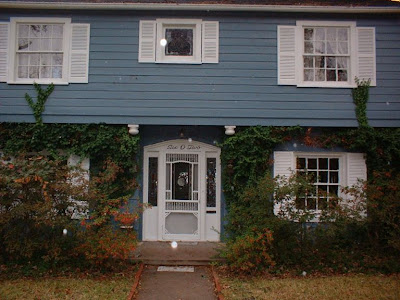 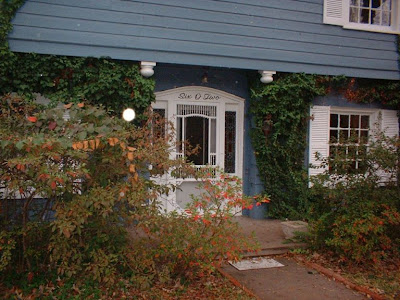 Is that an orb in this picture?? What did I tell you about that ‘exact spot’….*

And here it is last year, 2007. Before our friend Paul helped us landscape. 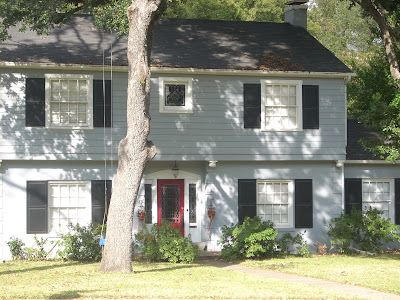 And I know you’ve seen this before, but I’ll post it again just to show the changes through the years. This was our house this spring, after landscaping. (Thanks Paul).

*And I’m just kidding, DIANE, before you leave me a comment about how Godly Women don’t believe in ghosts. Its a joke, all right?